Those Home-Improvement DIY Projects? 5 Ways to Finally Tackle Them in 2021 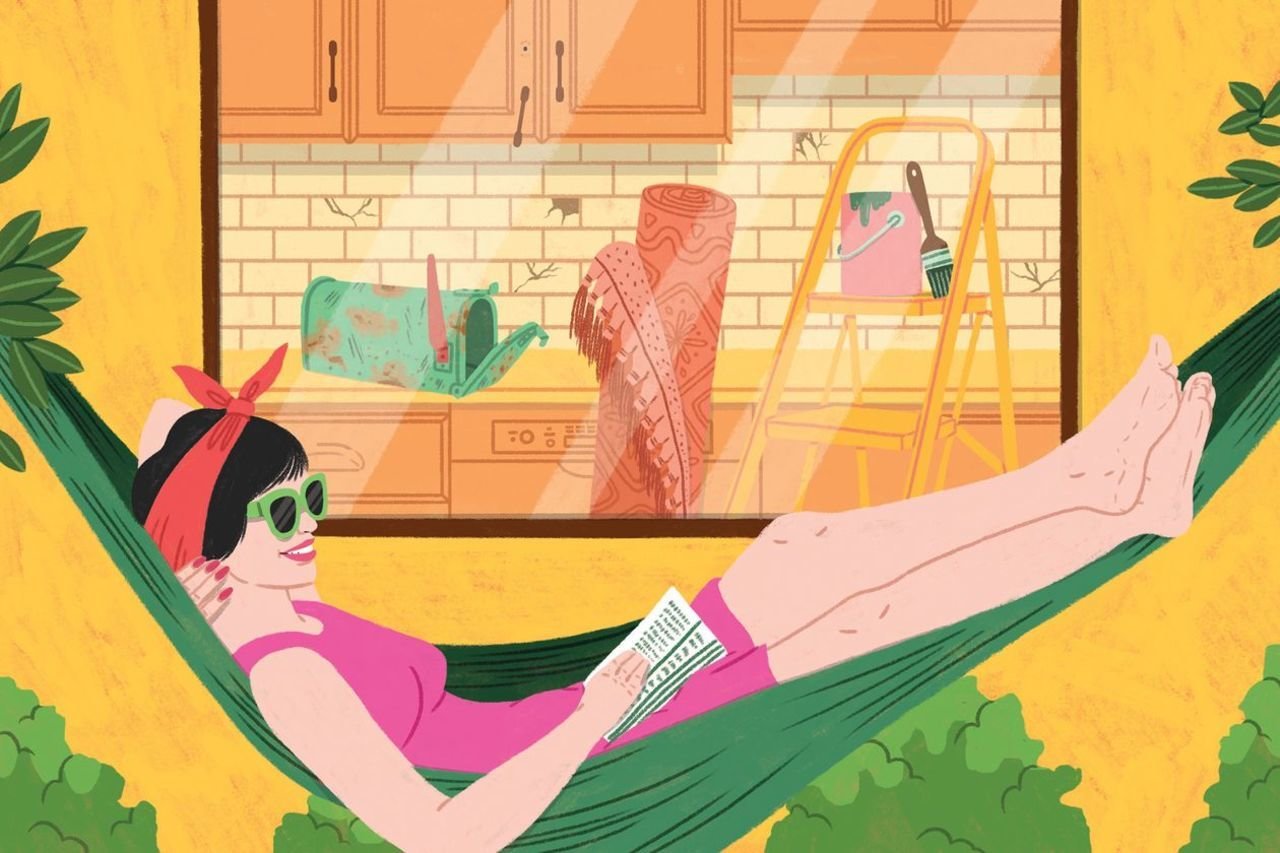 Intimidated by those New Year’s design resolutions? For help taking on her 2021 to-do list, columnist Michelle Slatalla turned to experts in the very human weakness of procrastination.


MY FATHER was known for his daily lists. Every year on Dec. 26, he itemized the dozen tasks that would let him immediately eradicate any trace of Christmas. Not that he was a bah-humbug kind of guy, but he did not dally when there was work to do. By nightfall, the tree was at the curb, my mother’s mechanical Santas were in the attic and the breakable ornaments were safely packed away in what he called their “babble wrap” (he also was known for malapropisms).

My father attributed the fact that our house was always in perfect repair to his lists. As he said, “They keep me in line, Scrutt Butt.” (This was a nickname, probably a malapropism, he used interchangeably for me, my three brothers or any other dawdler he was fond of).

This month I resolved to make my own list of the home projects I have been avoiding, and tick them off one by one in 2021. But I ended up with 47 items on my list, and just looking at it overwhelmed me. So I played some online bridge and then I took a nap.

But shortly after I awoke, I heard a voice in my head, sort of like the Ghost of Post-Christmas Past, and it said, “Start by grouping similar tasks together, Scrutty. It’s not rocket science.”

I did that and came up with five categories of décor projects, which seemed like an improvement. And yet each seemed to represent its own circle of procrastination hell. So I sought professional help—not for the project itself but for ways to get oneself to actually tackle the job rather than goldbrick.

The dilemma: My mailbox was rusty and forlorn the day we moved in, eight years ago. And yet I’ve never painted it.

“Why am I ignoring my rusty mailbox?” I asked Professor Joseph Ferrari, a psychologist at DePaul University in Chicago who studies chronic procrastination.

“We do become habituated to some things, and then instead of fixing them, we tell ourselves we don’t have time to deal with it right now,” he said.

A common excuse is to tell yourself the problem will fantastically go away on its own. “But postponing is a big mistake,” Prof. Ferrari said. “It’s like ignoring a toothache.”

The solution: Recognize that dealing with the problem “will give you a moment of satisfaction,” Prof. Ferrari said. “Then declare an intent—‘I’m going to paint it by a certain date.’ That day go to the store to get outdoor paint. A body in motion tends to stay in motion, so once you get the paint, you’ll be on your way.”

The dilemma: The 10-year-old wooden window shades in my office are serviceable but faded from a decade of sun exposure. I can’t decide if it’s worth it to pay for replacements or save the money for a more-pressing problem.

“The way to decide is to upgrade the priorities first—the things that bother you so much you really don’t want to live with them anymore,” said Keri Montross, a homeowner in upstate New York who documents her home décor upgrades on Instagram. I found her while procrastinating. Most recently she and husband Kyle have replaced a blocky bedroom mirror with a round one that hangs like a luminous moon over a dresser.

“That mirror was something I had to look at every day, so I knew a better one would make a real difference,” she said.

The solution: Spend your upgrade money on things that will make the biggest visual impact on your space, Ms. Montross said: “I also want to upgrade some white wire shelves, but those can wait because they’re in a hall closet behind a door.”

The dilemma: My kitchen cabinets need to be repainted, but my husband and I work at home and can’t imagine how I can schedule such a disruptive project. What about the dust? The fumes? The noise? And how will I make lunch with the kitchen out of commission?

“We painters have been dealing with those problems for years, long before there was a virus, and we’ve come up with strategies to take care of them,” said Jason Bertoniere, a painting contractor in New Orleans. “We’re used to using odor neutralizers, plastic sheeting and side doors to stay out of your way.”

The solution: Call your painter and devise a strategy together. “We can come up with a plan to paint a whole house while you’re living in it, without disruption,” Mr. Bertoniere said. “We can do a room at a time, and create containment areas.”

The dilemma: The fringe is unraveling on the rug under my kitchen table, but I’ve been delaying taking it in for repairs. Under the rug, the hardwood floor is scratched. What if I roll it up and realize the whole floor needs to be refinished?

“If you make it seem too big, you can get overwhelmed by a project and never get started,” said Amy Tokos, the president-elect of the National Association of Productivity and Organizing Professionals. “People tend to overestimate how much time something will take and how much work it will involve.”

The solution: Don’t imagine all the things that could spiral out of control. Instead, make a list of the concrete steps you know you need to take. A sub-list? “Just start small,” Ms. Tokos counseled. “The only decision you have to make at first is to roll up the rug. That’s step one. After you do that, the next step will become obvious.”

The dilemma: I need to clean out my messy office drawers to make room for the books and papers that are piled up on my desk. But if I do, what will happen to the stored stuff: piles of old family photos, children’s artwork and newspaper clippings of stories I wrote in the 1990s?

“All that stuff is in a drawer where you’re not looking at it?” asked Catherine Roster, a professor of marketing and consumer psychology at the University of New Mexico. “You’re not honoring anything by hiding it in a drawer with other castoffs.

“Things can evoke memories, but remember that the thing itself is not the memory,” she said.

The solution: “Make a rule that you will allow yourself to keep the five most important things from the drawer, and display them where you can see them every day,” Prof. Roster said. “The rest? Give away things that might have meaning to other people. Make scrapbooks of meaningful things to give to family members. Then say goodbye to the rest.”

After talking to the experts, I felt ready—even excited—to get to work. I even cut short a rubber of online bridge, masked up and headed to the hardware store to buy mailbox paint. “Now you’re cooking with glass,” I heard my father say.