Inland Empire has nation’s biggest drop in homes for sale 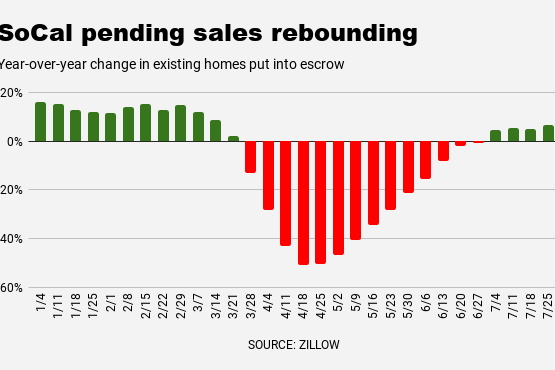 The supply of existing homes for sale in the Inland Empire has fallen the most among 50 major U.S. markets tracked by Zillow.

Homeowners across the region, and the nation, have largely refused to put their homes on the market in the pandemic era, fearful of having strangers inside and the challenges of finding a new place to live. Riverside and San Bernardino’s 42.1% drop in supply for the year ending July 25 was just ahead of Baltimore, down 42%, and Hartford, off 39.6%.

Los Angeles and Orange counties had the 21st biggest drop, down 27%, according to Zillow. The national supply is down 26%.

Despite limited options for house hunters to choose from, Southern California homebuying continues to recover from a pandemic-weakened spring as pending sales increased for the 13th weekly increase in the past 14 weeks.

According to revised data from Zillow, Southern California’s four-county region put 3,716 existing residences into escrow in the week ending July 25 — up 0.9% in a week and up 6.6% over the past 12 months. It is the fourth-consecutive year-over-year jump in pending sales after 14 straight declines.

Highlights of the week for Los Angeles and Orange counties …

New listings: 0.6% fewer new homes on the market in the week. That left total inventory down 27.4% over the year.

And in the Inland Empire …

Listings: 3% fewer new homes put on the market in the week. Total inventory is off 42.1% over the year.

Remember, pending sales — which require various approvals, including that of a lender if a mortgage is involved — are a hint of which direction closed sales will go. The spring was the slowest-selling second quarter in a database from DQ News that dates to 1988.

The 10 Best Neighborhoods To Live In Southern California
September 28, 2021

What Buyers and Sellers Need To Know About the Appraisal Gap
August 31, 2021

A Look at Home Price Appreciation and What It Means for Sellers
August 17, 2021